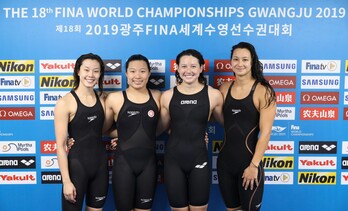 2019 had been a crazy year! I graduated from the University of Michigan, qualified for my second Olympic Games, and placed 4th at the 2019 World Championships.

Since the past few years, the 200m freestyle has been my signature event. Many swimmers believe that this event is one of the more difficult events, because it requires the perfect blend of speed and endurance. In the Rio 2016 Olympics, 18 year-old me finished 13th in the 200m freestyle – the highest any Hong Kong swimmer has ever finished at the Olympics. I was very nervous before my race because I was up against the best swimmers in the world, but I was elated. A year later at the 2017 World Championships I finished 5th in the same event. I was very shocked because it was such a humbling experience, and I never thought I was able to achieve this kind of result. Fast forward to 2019’s World Championships in Korea, I narrowly missed out on a medal in the 200m freestyle by 0.2 seconds. I was a bit upset by it at first. However, I did set a personal best by more than a second, and also broke my Hong Kong record. I tried my very best at the race, and I was honoured to be considered as one of the swimmers who might have a chance of medalling.  Although I did not medal, I still received a lot of supportive messages from my family, friends, and the public. I was proud to represent Hong Kong at these international competitions, and honoured to bring joy and pride to people in Hong Kong.

Apart from my individual events, I was also fortunate enough to be on the 4x100m freestyle and 4x200m freestyle relays that qualified for the Tokyo 2020 Olympics! It was always our goal to have at least one relay qualify for the Olympics. With this ambition in our minds, we gave our best and swam as fast as we can. I am delighted that we will have a big group of swimmers heading to the Olympics! As the saying goes, “the more the merrier!” Even though we have the Olympic qualification for two relays, the list of swimmers who will swim in those relays at the Olympics is to be determined. That is why everyone is still training hard, in hope to get a relay spot and represent Hong Kong in Tokyo.

Siobhan Haughey at the opening
ceremony of the 2016 Rio Olympics

I still have six months to go before the Olympics, and I know there are a few things that I can work on and improve on before I compete in Tokyo. I also still find it hard to believe that people associate me with other world-class swimmers, because I used to look up to them and now I am racing them. But it is a great experience for me to compete in the same race as them, because the more opportunity I get to race them before Tokyo, the better. It is like a rehearsal for the Olympics. When I am not competing, I am training hard in and out of the swimming pool. Apart from swimming up and down the pool, I also go on a spin bike, lift weights at the gym, and do pilates. The variety of training I do helps me develop and train different muscle groups in my body that are required for swimming. This all adds up to over 25 hours of training per week. It can be tiring and challenging at times, but if I want to achieve my goals, I have to put in the hard work.

One thing I am looking forward to the most at the Olympics is the opening ceremony. I attended the one in 2016 and it was a very memorable experience, because I got to see all the athletes from all over the world. I also remember receiving text messages from my friends back home saying that they saw me on TV! Apart from that, I am also excited to race in the two events that I qualified – the 100m and 200m freestyle. In the last Olympics, I reached the 200m freestyle semi-finals. This time around, I hope to improve on my best time and make the finals. It is definitely not an easy task. As I am improving, everyone else in the swimming world is also improving. However, I will have a lot more experience under my belt than I had in my first Olympics.

As I prepare for the 2020 Olympics, I hope to enjoy the journey while being on the grind and working hard. The countdown has already begun. Six months to go. Let’s do this!