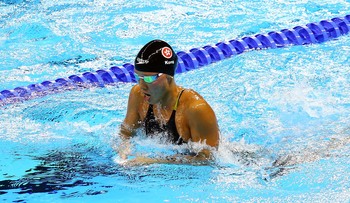 I still find it hard to put into words my incredible experience at the 2016 Rio Olympics. I remember the sensation on arriving at the Athletes’ Village, despite having only two hours’ sleep the previous night. I had been dreaming of this place for almost all my life! By a rough calculation, I had logged about 28,860 kilometres (three-quarters of the way around the Earth) and an estimated 12,500 training hours in 13 years of competitive swimming to get there. That’s 17 months of non-stop working out.

Yet numbers alone cannot justify the journey. It was immeasurable – the heart and soul put into it, the emotional rollercoaster, and the teamwork that made it happen… I wasn’t on this journey alone. Countless swimmers diligently put in the due work, and bravely put themselves on the frontline of heartbreak. The success rate was small, yet the crushing feeling of missing the Olympics could be all too real. A split second margin is the difference between gold and also-ran, and that’s just one of the brutalities the sport exposed. The burning lungs at 6am in the cold winter, the perpetually fatigued body and deoxygenated brain, the choking lactate – never mind, it was all worth trekking through to reach this place.

So, through my wide and starry eyes, the Athletes’ Village felt like Heaven. It was surreal to be this close to something I’d worked towards for a long, long time. I fizzed with excitement in my fantasy and felt immense gratitude to the people who helped me get there. My inbox was flooded with messages as my phone danced with goodwill carried in from all over the world. Each buzz was like a delightful encouraging tap on my shoulder. Taking a social media hiatus, I thought, would allow me to soak up the experience into every pore I had. Rio alone was a lot to process – both on an emotional and an expertise level.

Wasn’t I foolish to think that the Olympics would be not so different from other competitions? I had been very lucky to compete in most major meets but the Olympics turned out to be a whole new package to deal with. It was a humbling learning curve – the media hype around it and the compulsion to perform, especially with it being only every four years. While the combination could boost the experience, it could also easily distract from one’s performance. I tried to keep focused on my performance while taking in the experience as much as I could. At one point, I caught myself being too fixated on performing and reminded myself to enjoy everything else the Olympics offered.

The Olympics showcases the pinnacle of sport. Walking around the Athletes’ Village, I couldn’t help but ponder the remarkable story of each athlete in getting to Mount Olympics. It was like a celebration of grit and determination and it promoted the values of unity and sportsmanship. The food court in particular was a melting pot of edible substances and even more so of people and cultures. A lot of the conversations across cultures began there and it was where I for one made new friends!

I didn’t perform as well as I’d hoped. While I had no regrets, I did feel it was a bit of a pity. I wasn’t sure if I would have the chance to compete in my favourite event after another four-year cycle for 2020 Olympics. Joyfully, after a slight moment of self-pity, I was able to put things into perspective – I’d fulfilled my childhood dream of competing at the Olympics! I carried my best self into the race, enjoyed it, and was happy with my efforts. I also felt a well of gratitude for being able to be there. I’ve come a long way and frankly was pretty content with the journey. The relay was precious. It was special to share the Olympic experience with my teammates I’ve known for years and I am sure we all have treasured memories of it.

The Olympics, or perhaps life at large, is more about the intangibles. The love and passion; the hope and possibilities; the satisfaction and appreciation; the humanity and sensitivity; the falling and learning, the peace and competition… I thought about Nikki Hamblin and Abbey D’Agostino, who showed the world the Olympic spirit as they helped each other to finish the race after tripping over. The comeback story of Anthony Ervin after a decade of soul searching won hearts. And the Syrian refugee Yusra Mardini who swam to push her sinking boat to Greece and still fought her way to Rio, among others. While some won medals, others did not even come close. Yet they all won. Success seemed to be relative, so as contentment. Sometimes it’s easy to get bogged down with expectations and societal definitions of success. What makes a ‘success story’? I wasn’t sure, yet it seemed uniquely comparable to one’s own limitation. Ultimately, we could only break our own barriers. In retrospect, my Olympic experience was not only a fulfilment of my childhood dream, but also a test of my ability to put things into perspective.

Looking back at my journey so far, I feel tremendously grateful. It hasn’t been the easiest path, yet every roadblock was an opportunity to challenge myself and grow. I’ve gained a renewed perspective on life and arrived at a better state of mind. And I feel ready to learn more while taking on the next milestones. In turn, I hope to encourage others to reach their dream destinations as well.